A Tribute To Frank McGinnis 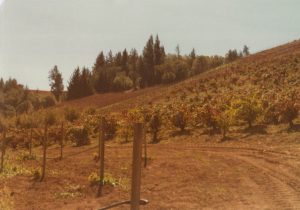 I would like to tell you about a very special man who served as our vineyard manager for many years, and who also, with no prior winemaking experience, served as a very effective Assistant Winemaker when we established our winery in 1984.  I think you’ll enjoy the story.  But first, some background info.

As many of you know, Molly and I bought our first vineyard during February 1977.  It was on West Dry Creek Road in Sonoma County, and the real estate broker who handled the transaction was Americo (“Am”) Rafanelli.  Am was also then the owner/winemaker of A. Rafanelli Winery in Dry Creek Valley.  Am and his wife Mary became our good friends for many years thereafter.  They were wonderful people.

At Am’s suggestion, we hired Jim Guadagni as our first vineyard manager.  At that point Jim was in his 60’s and had spent his life living and farming in Dry Creek Valley.  Part of our new vineyard was steep hillside with an elevation gain of 380 feet just within our property, and we planted most of that hillside in the years following our purchase.  One of my favorite memories of Jim was watching him drive our track-layer tractor pulling a big disc across that hillside.  Even though he was driving the tractor across the hillside, it was so steep that, in order to keep the tractor from sliding downhill, Jim had to point the tractor as much uphill as across.  Jim may have been in his 60’s, but doing that scary kind of tractor driving didn’t seem to bother him at all.

About a year into Jim’s work with us, he introduced me to Frank McGinnis, his son-in-law, who had recently settled in Dry Creek Valley.  Jim explained that Frank had recently retired from many, many years of service in the U.S. Navy, where during the Vietnam War he had served as a Chief Bosun’s Mate on a U.S. aircraft carrier off Vietnam, with hundreds of sailors reporting to him. And, of course, Jim soon thereafter suggested that I hire Frank to help him manage our vineyard. Frank started working with us right away, and after Jim’s retirement became our sole vineyard manager.

Frank was very likeable, quite smart, good at listening to instructions, and always ready with intelligent questions.  He worked well with other people, and I never knew him to exchange unpleasant words with any of our vineyard employees or other workers.  Above all, he was a man who enjoyed doing hard and successful work.

We built our first winery during the summer of 1984, and even though Molly and I lived and had full time jobs in Los Angeles, I also served as the winery’s only Winemaker until 1991, when an exciting new job in Los Angeles (I became President of Metro-Goldwyn-Mayer) imposed some limitations on my frequent visits to our winery.  From the beginning of the winery I knew I needed help, but I didn’t want to hire another winemaker. That’s when Frank became our winery’s first Assistant Winemaker.

Frank had no prior education or experience involving winemaking, but as mentioned above, he was a quick learner.  We worked together closely, and he diligently followed our winemaking protocols when I was stuck in Los Angeles. The fact that Frank did a great job in both our vineyard and our winery is evidenced by the facts that the 1985 Meeker Zinfandel was a Wine Spectator “Best Buy”, the 1986 Zinfandel was a “Spectator Selection”, and the 1990 Zinfandel was included among the Wine Spectator’s “100 Best Wines of the World”.

When I look back on our years of collaboration in the vineyard and winery, one memory of Frank always brings a smile to my face.  During summer 1985, one of my best personal friends in Los Angeles came to visit along with his then-girlfriend.  When I was showing them around, my friend noticed our tractor, which was parked on a dirt tractor path in a flat portion of our vineyard.  He pointed toward to flat path ahead of the tractor, and said, “Later could I try driving the tractor a little bit?”  I replied, “Sure, but be careful.”  Later that day, I excused myself to drive into Healdsburg to pick something up.  When I returned, Frank was waiting for me at the top of the driveway.  “Your friend started the tractor,” he said.  “Told me you said it was okay.  After testing it on the path it was on, his girlfriend joined him on the tractor seat, and they steered it around to the front vineyard.”  [This was the steep hillside mentioned above with respect to Jim.]  Frank continued:  “They drove it about 30 yards up the steepest part of the hillside, then lost control, and both jumped off the tractor, which then started rolling backwards into the vineyard.  It tore down the trellis wires for five vineyard rows, and then was finally stopped by a sixth trellis.  I had to rescue the tractor.”  Frank stepped forward, put his arm around my shoulders, and with a stern look on his face, stated:  “Charlie, a tractor is not a toy.”  That was not the least of his good advice to me over the years!

Frank brought much wisdom, kindness, and warmth to his work, and he was instrumental to the early years of our business.  He left us with lots of wonderful memories.  Thank you, Frank!