Co-Founder Charlie Meeker Has Passed Away 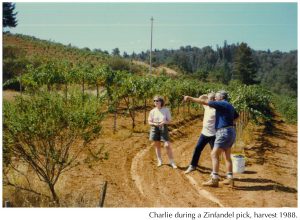 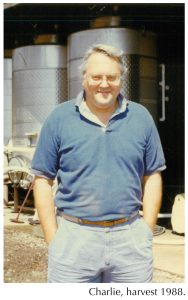 We have some very sad news to share today. Last week Charles Rutherford Meeker III—Charlie to most—passed away after 78 unparalleled years. He leaves behind his wife Molly, his children Kelly and Lucas, and grandchildren Canyon, Madison, Delaney, and Kai. He was preceded in death by his parents Doris and Charles, his brother Michael, and his daughters Michelle and Melissa.

After he told you about the family he was so proud of, he would have told you that he was a winemaker, an attorney, and a film producer (and in that order). But to those around him he was an insatiable learner, an engaging storyteller, and a warm soul with a kind heart. His life was defined by a few simple, powerful things: effort, generosity, honor, and adventure.

Charlie was born in Dallas, Texas in 1942 to Charles Rutherford Meeker, Jr. and Doris Shaw Meeker. His father was a wine lover and a pioneer in the Texas entertainment business—leading the Dallas Summer Musicals from 1944 to 1961 and entertainment at then-new Six Flags Over Texas. Charlie learned many lessons from his father when he worked with him at the musicals during his summer break; but after a late night closing the theater Charlie’s dad would open a bottle of Burgundy and share his passion for classic French wines—an uncommon thing in Texas at that time.

Folks these days mainly know Charlie through The Meeker Vineyard, the vineyard-turned-winery he founded with his wife Molly in 1977. But before devoting himself to winemaking full time, Charlie also had a rich career in the entertainment business.

After graduating from Princeton University and University of Texas Law School, Charlie moved to Los Angeles to clerk for Judge Walter Ely. He joined O’Melveny & Myers and rose to partner working in the business and later the entertainment divisions. In the 1980’s, he co-founded Feldman/Meeker Entertainment and produced major motion pictures for nearly a decade (his favorites were The Hitcher, Near Dark, Golden Child, and Hot Dog: The Movie!). He returned to entertainment law as a partner at White & Case, where he successfully represented Credit Lyonnais in their effort to regain control of Metro Goldwyn Mayer. Charlie then served as MGM’s President from 1991-93, overseeing MGM’s transition to stable financial footing.

Through many of these accomplishments, Charlie was splitting time between his career in Los Angeles and the winery in Dry Creek Valley. After a few more years in LA, Charlie and Molly ended their dual life and finally moved to Sonoma County full-time in 1999. Charlie further poured himself into his winemaking; expanding production, experimenting with extended aging and tannin development, and developing a cryogenic dessert wine process unique to Meeker.

While he accomplished many things in his “previous life”, Charlie’s true passion was winemaking. His adventure in winemaking and the people and places it shared with him brought him incredible joy. Dry Creek Valley and Sonoma County—along with its people and wine industry—were woven into his soul; he saw his place here as a serendipitous, unmatched gift and the opportunity to make its wines a glorious privilege.

The winery, its team, and community will miss Charlie dearly; but his winemaking ethos lives on at Meeker and with the winemakers he helped, inspired, and shared with along the way. His tireless drive to experiment, refine, improve, and explore yielded over 30 vintages of wines that tell a story of eternal optimism, boundless curiosity, and chasing greatness. He loved making wine and he loved sharing it.

He will be incredibly missed around the world, but nowhere more so than with his family and in his winery.