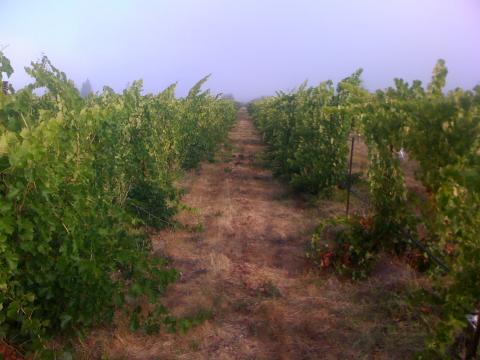 In the past, The Nature Report has concerned itself with different kinds of dog and cat, dog and dog, and cat and cat interaction. The “marking” behaviors of dogs have been discussed as well as feline tolerance perimeters and their fungible properties. With the addition of Austin to the family, all of the Meekers, and especially Molly, have had opportunities to observe domination rituals among dogs at a new, intense, and hilarious level.

For those of the Tribe who have yet to meet Austin, Vivie, Moose, and Ennis, here are the particulars: Moose is a 13- year-old Lab mix tremendously devoted to Molly. Ennis is a two-year-old Goldendoodle owned by Lucas and his fiancée, Erika; Vivie is a Bichon Frisee owned by Molly and Charlie; and Austin is a one-year-old Goldendoodle – the half brother of Ennis – owned by Charlie and Molly. Ennis, Austin, and Vivie regularly spend working hours together in the winery offices, where most of these observations were made. Moose wisely spends his days at home on his memory foam bed(s), chewing jumbones, and has developed his own domination rituals to counter Austin which will be dealt with later.

So, every morning, Molly and Charlie load Austin and Vivie into the pick up and drive to the winery. Except it never happens that way. This is how it really goes: Charlie goes out the front door, followed by the dogs, Molly brings up the rear,carrying hand bag, brief case or tote bag, and sometimes yesterday’s mail. Charlie is watering the plants on the front patio, Austin and Vivie take off down the hill toward who-knows-what. Molly drops her bags in the truck, opens the back cab door and starts yelling “Load up – Austin and Vivie – come! Load up!” Charlie starts yelling, too, finishes watering, and gets behind the wheel. He starts the engine as Molly keeps yelling.

Eventually, Austin comes and jumps in the back of the cab. Vivie approaches the cab, wagging her tail and looking particularly cute as she turns tail and runs back down the hill. Death is threatened. Vivie is called names unprintable here. Eventually, she, too, approaches the truck and is snatched up and deposited in the back seat of the cab. From there, Austin and Vivie vie for pride of place in Molly’s lap. Vivie wins, though they both used to ride there when Austin was a puppy. Austin reclines on the center console, his rear end and legs still in the back, with his nose under the AC vents. Occasionally, he leans into Charlie for affection, pinning Charlie’s right arm to his side and endangering the lives of everyone in the truck and on the highway.

Charlie and Molly arrive at work exhausted. Austin and Vivie are just warming up. As they enter the office (after negotiating the barrel room and lab, where everyone has to be greeted and pats distributed), Ennis greets Austin and Vivie at the door, and they all follow Charlie to his desk for the morning “treats” ritual. It is during the trip from the door to the desk that the domination trials begin. Ennis and Austin, in a blur of burnt-orange fur, jockey to be first to the desk, while Vivie runs underfoot, beginning the low-pitched, frustrated growl that will underly most of the rest of the day. Equal numbers of treats to each dog are distributed – Charlie is meticulous – and the games escalate.

Vivie follows Molly into her office, Austin or Ennis picks up a squeaky toy, and Ennis or Austin grabs the other end, and they play tuggies, following Vivie into Molly’s office. When one of the boys tires of the game, the other waves the toy enticingly in front of his face, usually with a fetching little shake of his booty, and the game starts again. Sometimes the toy is abandoned early and the real domination trials begin. Canine Greco-Roman wrestling takes up the center of the room, with Vivie prancing around the edges, cheerleading. One or the other of the boys gets tired, assumes the “you the man” position: flat on his back with the other guy’s paw on his neck, and everybody takes a nap. One hour later it all begins again. Once, Austin managed to remove Ennis’s collar. Once, Ennis fell asleep on top of Austin. Austin has also been known to drag Vivie around by her neck or tail, whichever is handiest. She is sufficiently annoying to everyone else the rest of the time that no one rushes really fast to rescue her.

Lucas has forbidden Molly to buy squeaky toys for the office in the future.

Oh, and Moose? He dominates Austin by snarling and bending his lip at him whenever Austin gets within six feet of his memory foam doggie bed. Austin intuitively grasps authenticity.

All of the Meekers: the dogs, the cats and the humans (at home and in the winery), are thinking of all the humans, dogs and cats who have weathered Sandy and are now trying to recoup their lives. It is unimaginable and we hold them in our hearts.