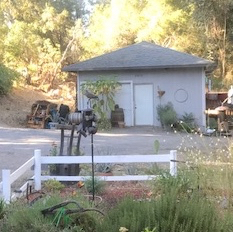 Molly likes to watch birds, so the Meekers have two bird feeders in front of their house (they used to be in the back garden where she could watch them while eating breakfast, but they ate all the vegetable seedlings Charlie raised one year, so now they’re away from the garden).  One is full of black oil sunflower seeds – by far the most popular – and the other has a mix of seeds, including corn and millet.  These feeders are tubular in shape, with a tiny perch below each of six openings for the birds to rest on while they stick their little heads in the tube to eat.

By far the most common of the species are house finches and oak titmice – birds no more than 3 inches in length and very feisty.  Molly also sees nuthatches, scrub and stellar jays, grosbeaks, and, the most showy, western tanagers.  Lately, however, a new bird has come in to feed.  In the beginning, there were only two, about four weeks ago.  They are not tiny.  They are banded tail pigeons and they are beautiful and huge.  At least 15 inches from beak to tail.  These are not the pigeons you see in the city.  They are wilder and, apparently, it is unusual for them to use feeders.

Watching these big guys try to feed is hilarious. At rest or on the ground, they move with dignity and poise.  But even the saucer-shaped ledges around the bottom of the feeders do not give them enough purchase to hang on and stick their beaks into the food.  They start to slide off when they lean in, which forces them to flap their wings to keep their balance.  Now, when there were only two of them, one would sit sedately on the top of the feeder while the other flapped madly, first head up, then head sideways, then head down, with the feeder swinging wildly and the pigeon on top hanging on for dear life.  Finally, the one flapping would get his beak in the food long enough to get a seed.  He would drop to the ground, reassume his self-possession and the guy riding shotgun on top would take his turn.

Molly has been out of town for a couple of weeks and when she returned, the pair of pigeons had turned into a flock.  Today there were about 20 in the yard, two on top, four flapping for all they were worth hanging onto various parts of the feeder, and 14 or so waiting their turn on the ground.  The feeder looked like a merry go round out of The Birds.  No heads, no bodies, just a circle of flapping wings.  And the finches and titmice? On the fence.  Unhappy.