I know what you’re looking for: the September 2011 Tribe Newsletter and..

In September, Molly was fortunate to host, for the second time, the Silverlake Country Club’s Vintners’ Golf Tournament and winemaker dinner. Part of her duties included manning a wine pouring station on the course at the “turn.” This important responsibility came with perks as well: She had time to observe the wildlife on the course between foursomes. 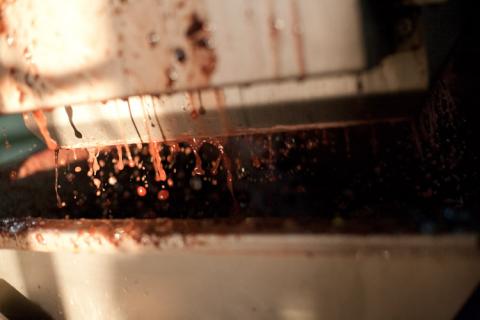 Unlike Sonoma County, where it seems there is only one kind of squirrel (gray with some brown edges and tips), Ohio has a plethora of squirrel color ways. Molly observed red squirrels with copper highlights, pitch black squirrels, brown squirrels, and one squirrel she named Rod Stewart for his brassy blond tail with black roots. All of these squirrels were on a frantic mission. Just behind the wine table there were two trees bearing what looked like small walnuts still in their outer husks. Upon closer scrutiny, it became clear that they were not walnuts, so Molly did what any red-blooded American would do in the circumstance: she googled “nut trees + Ohio” and, from the descriptions given, was able to deduce that the trees were yellow buckeyes. Despite having bee born and raised in the same part of Ohio, Molly was heretofore unaware of their being any buckeye other than the standard brown, OSU, variety. Take a moment to visualize Bambi’s daddy with bright yellow eyes…scary, huh?

In any event, these yellow buckeyes were ripe and the trees were squirrel central. Rod Stewart first caught Molly’s attention when he ran across the ninth green with two buckeyes protruding from the sides of his mouth. When she went looking for the source of his plunder, she found, in the glen fifty feet below the shop area, two groundhogs placidly eating their ways in widening gyres from their dens, and two black squirrels chasing each other away from the buckeye trees. While the black squirrels were so involved, one red squirrel ran clean up the trunk, scrambled to the very tip of a branch where the nuts hung, pulled one off, and raced down the trunk with it still in its husk. Rod Stewart returned and climbed more sedately up the trunk, plucked a nut and sat on the branch, holding it in both tiny hands and, with the efficiency born of long practice, chewed the husk off the nut in three neat swipes, and clambered down with it held in his teeth.

The black squirrels were now chasing each other dangerously close to one of the groundhogs, who lifted his head and waddled two steps in their directions, sending both of them racing frantically off in opposite directions away from the key trees. Simultaneously, the red squirrel was incoming, then swinging on the end of a branch, and popping a nut in its teeth while Rod shimmied up the other side and repeated the two-hands-and-teeth nut cleaning performance. The two black squirrels returned from opposite sides, ran straight toward each other, stopped dead, looked at each other a moment, chased tails around in a circle for a few seconds, got warned off by the other groundhog and, again, neither made it to the tree.

This entire process repeated itself several times over the course of three hours. Rod Stewart loped by several times with two buckeyes, the red squirrel several times with one (Rod had a bigger mouth), but, to Molly’s knowledge, neither of the black squirrels ever made it up the tree. Perhaps this is the reason they died out in California: in their determination not to cooperate with each other – or at least to tolerate each other and share the bounty – both went hungry.